Postmodernism is one of the most controversial art movement. It's an unstable mix of the theatrical and theoretical. Postmodern style had many different faces: colourful and ruinous, ludicrous and luxurious. What they all had in common was a drastic departure from modernism’s visions, which had been based on clarity and simplicity.

The modernists wanted to open a window to a new world. Postmodernism, by contrast was more like a broken mirror, a reflecting surface made of many fragments. Its key principles were complexity and contradiction. It was meant to resist authority, yet over the course of two decades, from about 1970-1990; it became enmeshed in the very circuits of money and influence that it had initially sought to dismantle.

Postmodernism shattered established ideas about style. It brought a radical freedom to design, through gestures that were often funny, sometimes confrontational and occasionally absurd. Most of all postmodernism brought a new self – awareness about style itself.

The death of modernism has been proclaimed on countless occasions. For historian Charles Jencks, it ended at 3:32pm on the 15th of March 1972, when the Pruitt-Igoe housing project in St. Louis, Missouri was dynamited.


In his book “the language of postmodern architecture” (1977) Jencks concluded that the demolition of Pruitt-igoe marked the end of modernist idealism; ‘let us then romp through the desolation of modern architecture, visiting he archaeological sites with superior disinterest. After all, since it is fairly dead, we might as well enjoy picking over the corpse’.
2. The modernist Pruitt-Igoe designed by the Japanese – American architect Minoru Yamasaki

In the late 1960's, Italy was a key centre for critical practices which lay the ground for postmodernism. Designers such as Ettore Sottsass and Alessandro Mendini, disillusioned with the utopian promise of modernism, began to seek alternatives by challenging social norms, market imperatives and assumptions
of taste.

Their route lay in thrilling, instinctive encounters with ancient and popular culture. Pre-Columbian monuments, petrol stations on the side of the highway, plastic counter tops in the local coffee bar – all
were sources for the eclectic experiments with images and objects they called Radical Design.
3. Ettore Sottsass

Artist and graphic designer Tadanori Yokoo was a pioneer of postmodernist appropriation and bricolage.

In 1981, as if to greet the new decade, pop artist Andy Warhol created one of his signature silkscreen paintings.

It featured a big, beautiful dollar sign. This ironic acknowledgement of his own works market
value exemplifies postmodernism in its final stage. As the 'designer decade' wore on and the world economy boomed, many postmodernists participated enthusiastically in a culture obsessed with wealth and status. Ultimately, this was the undoing of the movement. Postmodernism collapsed under the weight of its own success.

Looking back, we can learn a lot from postmodernism’s fatal encounter with money. Faced with Warhol’s paintings, the theorist Fredric Jameson wrote: ‘they ought to be powerful and critical political statements.
If they are not that, one would certainly want to know why.’
5. Tadanori Yokoo

Margaret Thatcher’s Britain was a battleground between ‘enterprise culture’ and its critics. As areas such as Docklands in London were converted into high-rent estates, many artists and designers turned their energies – and postmodernist technologies – to political protests. A billboard by peter Dunn and Loraine Leeson (one of a series) is reflective of this. shows a bricolaged London skyline, with huge piles of cash sweeping away the existing cityscape.
6. Andy Warhol

The dystopian aesthetics of the 1980’s found its ultimate expression in director Ridley Scott’s film ‘Blade Runner’. Described by Syd Mead, its production designer, as ’40 years in the future and 40 years in the past’, the film samples styles and genres obsessively; film-noir and sci-fi; an Asian-style cityscape littered with retro and futuristic references; a Raymond Chandler detective story set to an electro soundtrack by Vangelis.

(Below) Imagery from Blade Runner: 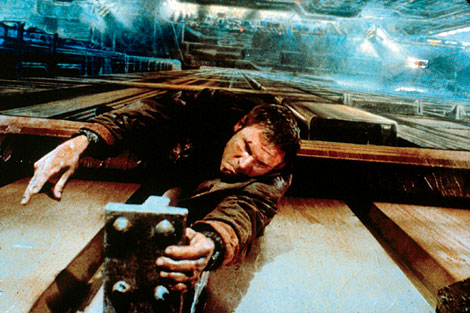 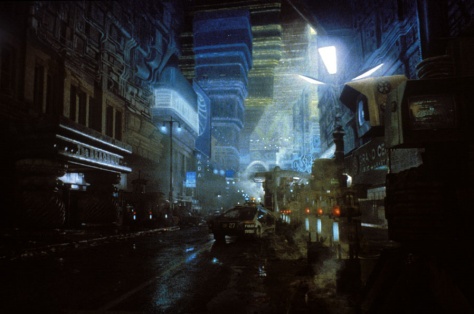 By the end of the 1980s, postmodernism was no longer a radical idea or a subcultural style. It had entered the mainstream. For many this was a time to stand back and take another look at postmodern culture, and to offer a critique.

It was a period obsessed with theory. Designers like Alessandro Mendini argued that ‘superficiality has depth, if understood and accepted as the profound difficulty of human life.’

Fine artists, in particular, reflected on the power of branding and display. The mechanisms of the market, buying and selling, became an abiding preoccupation. By investigating this world of appearances, they tried to turn the power of the commodity against itself.

Why can't we be ourselves like we were yesterday?

In the 1980s, the thrills and complexity of postmodernism were enormously influential. But do we still live in a postmodern era?
Certainly the movement left behind a set of unresolved intellectual provocations. For example, New Order’s music video, which acts as the finale to this exhibition, poses a melancholy question that is still worth pondering: ‘Why can’t we be ourselves like we were yesterday?’ Postmodernism was marked by a sense of loss, even destructiveness, but also a radical expansion of possibilities.

In the permissive, fluid and hypercommodified situation of design today, we are still feeling its effects. In that sense, like it or not, we are all postmodern now.

- Postmodernism lived up to its central aim: to replace a monolithic idiom with a plurality of competing ideas and styles.
- Melancholy was one aspect of the postmodern regard for the page, but so too were the new possibilities afforded by the techniques of copying an appropriation.
- It is the Abstract version of modernism.
- Bricolage – by its nature, bricolage relies upon the assembly of existing elements by hand. (Handmade things – 2nd hand objects). - Deconstructing and assembling.
- If modernist objects suggested utopia, progress and machine – like perfection, then the postmodern object seemed to come from a dystopian and far – from – perfect future.
Designers salvaged and distressed materials to produce an aesthetics of urban apocalypse.
- Look at the shapes, designs, colours, materials used. Is there a structure to it? its not to scale, can be any proportion, there is no right or wrong).
- Artists – Anne Lennox (eccentric), Grace Jones, Laurie Anderson.
- Remix culture
-Style wars: postmodern graphics and photography, like other media, involved the use of bricolage, fragmentation and quotation.

The video on the left is True Faith by New Order. Made in 1989, its filled with eccentric, unique costumes and follows the ludicrous face of postmodernism. Whereas, Grace Jones video on the right, made in 2008 follows postmodernism's principles of rejecting scale and proportion. The whole video goes completely against what is considered correct and balanced proportion. In this instance, that being of the human form. This video is quite a recent example of postmodernism but there are many more examples of the present day.

POSTMODERNISM IN THE PRESENT DAY:

Many examples can be found, which are proof of postmodernism existing in the present day. For example looking at Lady Gaga, I suddenly thought of Lady Gaga. Her style fits in with the postmodern idea of "what you wear on the surface defines who you are." As co-curator Glenn Adamson pointed out in an interview, "You wouldn't have Lady Gaga without Grace Jones. Lady Gaga in many ways is a completely postmodern person."

In terms of design, many styles today resemble postmodernism in many ways. Superficiality, nostalgia, indulgence, kitsch, pastiche, frivolousness, you name it. Stefan Sagmeister (1962) is a New York-based graphic designer and typographer. Stefan Sagmeister follows both the witty and messy sides of postmodernism in his graphic design. Below left is the Zurich poster, by Sagmeister, done in 2003. 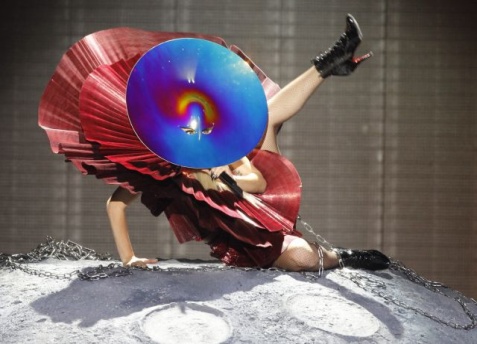 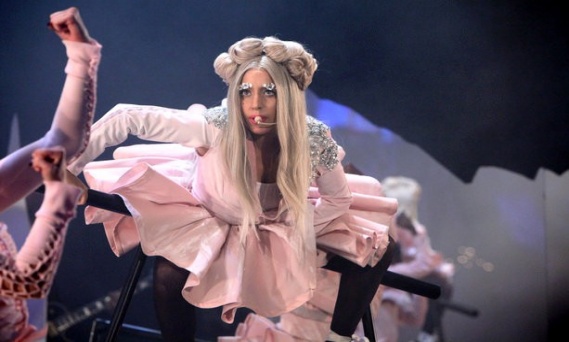 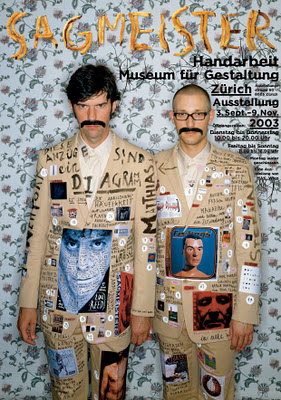 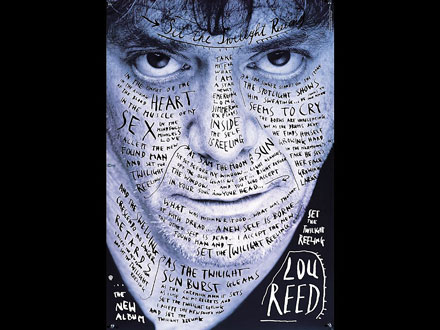 [[[ LINKS TO OTHER PAGES ARE IN THE TURQUOISE COLOUR OBJECT BOXES ]]]