Interaction is all about affecting the object, and offers the audience choice. It places the audience in relation to information displayed.

Interpretation differs to interaction. Interpretation is about the user looking at a piece of work and only being able to voice their opinion about it or take their own meaning from it. Whereas, interaction as mentioned before: ‘Interactivity means the ability to intervene in a meaningful way with the representation itself’ Andy Cameron.

However, there are grey areas where interaction & interpretation meet. This can be seen when looking at the myFry application.

The myFry application offers the user a chance to read through visual indexing with
a non-linear structure that allows you to create your own personal narrative.
The user can navigate through 112 self-contained sections, view their opening words and follow their tags. In addition, there are four colour-coded categories you can go to: People, Subjects, Feelings and Fryismsee. Furthermore, you can see which sections you've read and store your favourites

myFry's means you can interact with Stephen's story in new and unexpected ways. But this still doesn't define it as a pure example of interaction. Although you do interact through your navigation, you don't change anything that has been written. You can still only interpret the information that's presented to you, it can't be altered.
TENSE & ASPECT

Bernard Comrie looks at the relationship between language & time. Language has tenses, placed in temporal scheme (at a point in time). Something that has happened in the past, can't be changed.

Tense & Aspect are two forms of time reference in language.

Digital media can offer us that position where we are constantly at the beginning of something, generating new information constantly.

Digital media offers us ways to enter this ‘imperfect aspect’
Stories & Games and non-linear structures offer us this.
Narrative – stories

‘Narrative is a component of those deep structures with which we construct ourselves and our universe’ A.C.

‘It should contain both actor and a narrator; it also should contain three distinct levels consisting of the text, the story and the fabula; and its ‘contents’ should be ‘a series of connected events caused or experienced by actors’’ (Mieke Bal 1885) in Lev Manovich ‘The language of new media’ 2001 p227
Lev Manovich (1985) – Looking at narratives, defining what it is. An actor – action, making things happen, text is what represents the idea and it could be visual etc

Traditional representations of narrative are ‘perfective’ no matter what you do with them and where you enter them they are complete. The story is the content.

Vladimir Propp as mentioned previously looked at literature, identified many stories. He worked out the sequence bits of a story.

This is the idea that the narrative has component parts. Books are perfective – their in the past.

Daniel Merlin Goodbrey is a comic creator, new media lecturer and the creator of the website E-merl.com. All the comics and experiments featured on the site were created by him. The comics aren't your everyday type of comics, they are hypercomics. Hypercomics add a number of features to a comic/webcomic, including sound, animation, hyperlinks, non-linear breakdowns, reader interaction, and spatial expansion (such as infinite canvas). Goodbrey's comics offer the audience the chance to interact by clicking. This lets the user get to the desired section of the author's work. Although, the comics shown offer the user a chance to select where the story goes, it's still perfective as its closed. You can only navigate through the given information. This is the same with the example provided below titled PoCom-UK-001 which is a massive collaborative hypercomic. It was originally created for the wall of the ICA as part of the Comica festival. This web adaptation marked the debut of his flash-based zooming infinite canvas delivery system, the Tarquin Engine.
The Fantastic Flying Books of Morris Lessmore by Moonbot Studios:

'The Infinite Adventure Machine is a proposal for a computer program which generates fairy-tale plots. Based on the work of Vladimir Propp, who reduced the structure of russian folk-tales to 31 basic functions, TIAM aims to question the limitations and implications of attempts at programming language and narrative.
Because the program is unable to deliver a finished story, rather only a crude synopsis and illustrations, users have to improvise, filling the gaps with their imagination and making up for the technology's shortcomings.'

With TIAM the audience fills in the details of the story by selecting the details. So its imperfective as the structure is one where by filling in the details, you are adding things to reach a certain point. Here the audience becomes the author and this is further enhanced by the fact that you can control the things that come up. An example of TIAM in action can be seen below. 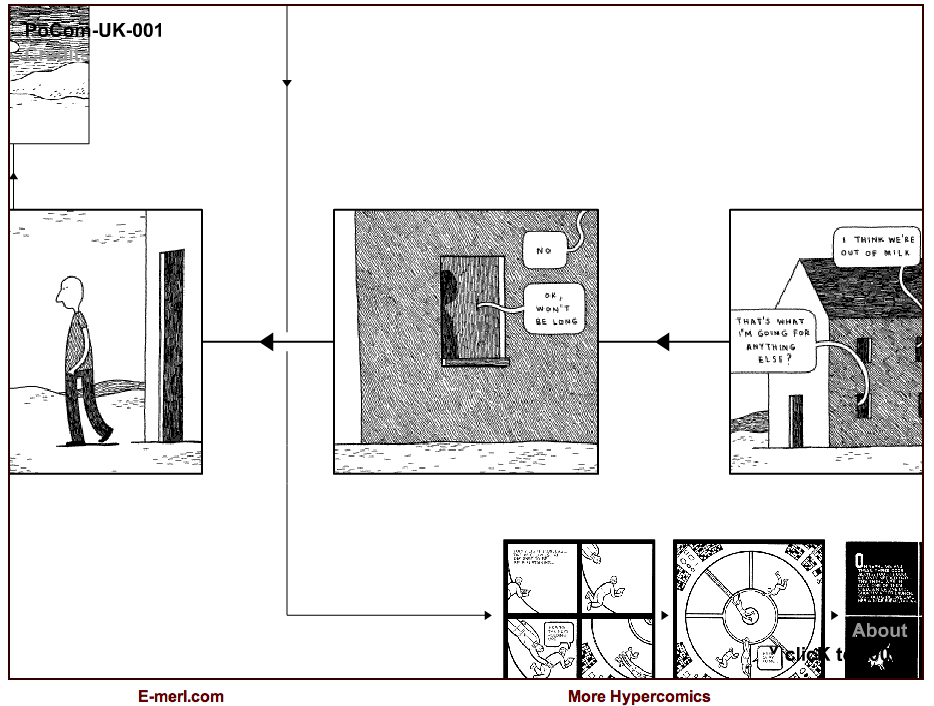 Siftables is a platform for physical interaction with information and media. It's all about understanding the world around us. The work involves physical digital blocks. The audience interacts with the authors work through physical touch/movement.
[[[ LINKS TO OTHER PAGES ARE IN THE TURQUOISE COLOUR OBJECT BOXES ]]]
EXAMPLES OF VIDEO GAMES:

- Through play, you can tell stories
- Games have rules/boundaries in comparison to stories
- A video game with nonlinear game play presents players with challenges that can be completed in numerous different sequences. Each player sees only some of the challenges possible, and the same challenges may be played in a different order.
- A video game with linear game play will confront a player with a fixed sequence of challenges. Every player sees every challenge and sees them in the same order.
- Ludology is the study of game and game play
- Ludology meets Narratology talks about game play and how it is met with the narrative. Games have a result: they define a winner and a loser; plays do not. The game itself is played during the development. The Beginning is a previous step, where the rules are defined and accepted by the players. The Result is the final step, where, according to the rules, a winner and/or loser are designated. The essay talks about the way the player of a game has to follow the right sequence in order to win the game along with many other aspects of narrative game play.
INTERACTION & THE AUDIENCE:

Games are both object and process; they canʼt be read as texts or listened to as music, they must be played. Playing is integral, not coincidental like the appreciative reader or listener. The creative involvement is a necessary ingredient in the uses of games. (Aarseth 2001) in Gonzalo Frasca ‘Play the Message’ 2007

Assassin's Creed is a historical science fiction action-adventure stealth video game that allows the player to play as Ezio (an assassin seeking revenge). This game is perfective as within the game every player sees every challenge and sees them in the same order. Also the player can only do the challenges presented to them, not create their own.
Little Big Planet:

Allows the player to customise his own character, build new levels and expand the environment. Also the player can collect the many and varied tools to enjoy the people and puzzles they’ve set. The game allows the user to be the author in certain aspects like building their own levels. So the game is imperfective as you can create your own levels and choose what games you put within them.