BACK
Arduino
Arduino is an open-source electronics prototyping platform and is good for creating interactive objects or environments.

Arduino can sense the environment by receiving input from a variety of sensors and can affect its surroundings by controlling lights, motors, and other actuators. The microcontroller on the board is programmed using the Arduino programming language (based on Wiring) and the Arduino development environment (based on Processing). Arduino projects can be stand-alone or they can communicate with software running on a computer (e.g. Flash, Processing, MaxMSP).

The boards can be built by hand or purchased preassembled; the software can be downloaded for free. The hardware reference designs (CAD files) are available under an open-source license, you are free to adapt them to your needs.

Arduino can be used for things like controlling lights, collecting data and many others. It is one of the hardwares often used by Pachube users. As with the combination of coding Arduino can record a wide range of data tracked by things such as sensors. This can be seen in the video below where an Arduino board has been used with a Temperature sensor to monitor the temperature. The monitor also stores the last 10 temperature readings. Next to the video is an example of a typical Arduino board. 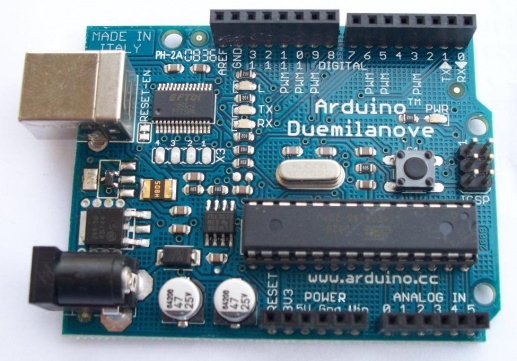